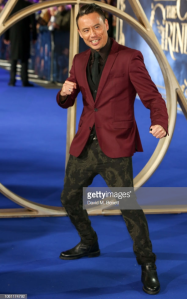 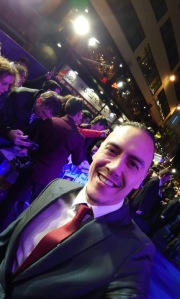 So, last April while performing in a play called, Why Not Us, by Rebekah Harvey and directed by Elif Knight, I got a call to see Fiona Weir. After signing NDA’s and reading for a juicy part I heard nothing for months. Then the call came. It was strange. Limo’s to set, lunch in trailer’s and rubbing shoulders with the biggest Hollywood stars I could name. I was treated like a VIP and I wont lie, I loved it. The set was huge, the pressures were real and the screen time….well, this is the thing.

I saw the screener and I’m just about in the film. If you blink you WILL miss me, but being a named character in the Harry Potter world seems to have given me a little sparkle. If at least for the premiere and the days and nights and weeks I was on set. It was one of the most surreal experiences I’ve had so far. I feel like a tiny teeny bit of a fraudster for getting so much love from friends and super star treatment from the press for which is essentially a few shots and a couple of looks. (But I’ll take it) What I did get from the whole experience is that I now know that I can hold my own on set with the big players. I had a one on one with David Yates, impressed Fiona Weir, hung out in make up trucks with all the principles and made a lot of good friends along the way.

Seeing my name pop up as Auror Chang has been a blast. Turns out I am Cho Chang’s grandfather and as a life long Harry Potter fan, it does give me feels. I loved every second of this little journey to the blue carpet and I’m glad I got to share it with my little brother. Even if we did, um, kinda miss the end….So, thanks JK Rowling, Tom Fitz, Fiona Weir, David Heyman and David Yates, let’s do it all again. (this time chuck us a bigger role, I wanna wand fight with Jonny Depp! ) X